When I was growing up, my family always called the evening meal “dinner.” If “supper” was used, it was interchangeable with “dinner.”

Husband grew up calling the evening meal “supper.” “Dinner” for him could denote a special large meal, but either of the noontime or evening variety.

There were a few times early in our marriage when he asked me to clarify what I meant by “dinner,” so now I use “supper” for the evening meal. I think Husband’s method is the correct, though old-fashioned, way of putting it, but saying supper is still not quite natural for me.

But I’ve got a tale of two suppers today. Thursday I had decided on chicken and biscuits, but due to a planning error, I ended up doing chicken and dumplings instead. Friday night, we had Irish dairy bread.

On Thursday evenings I have a tae kwan do class, so supper is usually something quick, something I can make ahead and then have Husband put in the oven while I’m coming home, or something in the slow cooker. I chose option three last week. I decided to do chicken in the crock pot that would soften up and get shredded over biscuits, which I would quickly make once I was home.

Of The Baker’s Companion‘s two basic biscuit recipes, one involves a food processor, which I don’t have. The other, “biscuits for breakfast,” I thought would be perfect and quick… except the dough is supposed to be chilled for an hour, something I failed to notice until I after got back from class at eight and Husband and I were already ravenous.

So I desperately turned to the dumpling section. We didn’t have time to cook them on top of the chicken stew in the slow cooker, but I was hoping there would be something. I ended up making “potato puff dumplings,” which are, interestingly, a variant on choux paste, but with mashed potato. The recipe gave three ways to cook them: boiling them in salted water, baking, or deep frying them. I chose options one and two, just to see what they were like.

I plan to make choux pastry eclairs later this summer for my sister, but I haven’t actually made this kind of dough before. I’m glad I’ve watched Alton Brown do it, otherwise I would have been a tad nervous. (As it was, I was already anxious for hurriedly trying an unplanned recipe.)

These had some added mashed potato and chives, which I could taste in the final product, particularly in the baked version, which did not puff up as much as I thought they would. They might have been a bit under done, actually, but they were tasty.

The boiled version, I found, fit in nicely with the chicken stew, becoming what felt like classic chicken and dumplings (for “fluffy” values of classic; my version might not sit well with southerners who like flat dumplings).

Not bad for a hurried recipe substitution.

Husband and I are fans of this Irish soda bread recipe. TBC has three variants on traditional Irish breads, what they call dairy bread, soda bread, and freckle bread. I tried the dairy bread Friday, which is similar in ingredients to the recipe linked above, but plainer, with less butter and sugar, and more buttermilk.

In fact, the recipe called for a measly 1 tablespoon of butter to be rubbed into 4 cups of flour. I tried to disperse the small amount of fat as thoroughly as possible, which resulted in flour which was just slightly more prone to form crumbles than powder. 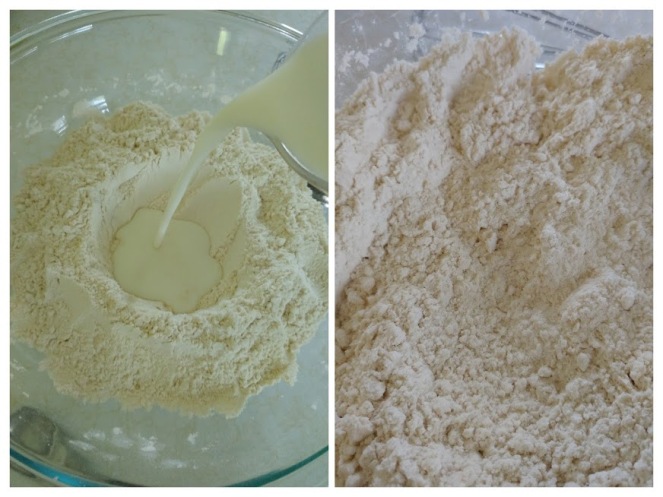 Then in went the buttermilk, which turned the mixture into a nice, substantial dough that held together well, but was sticky enough to dough up my hands.

The recipe says to bake it in a lidded cast iron pot, and barring that, on a regular baking sheet. Not having the former, I compromised and baked it on my big iron skillet.

It came out looking a lot like my usual soda bread. The flavor was less sweet and rich–but that really wasn’t a detractor. It was substantial, chewy, and plain but flavorful, a good side for a variety of things, and just different enough an animal to not suffer by comparison.

So, that was the rest of my baking for last week.

Is there anyone else out there that gets confused by the dinner/supper thing?