I should make a rule that I have to blog about my baking within a day. Otherwise, we end up like today–where I blog about something I made pretty much a full week before.

I’m not sure I’ll be able to self-enforce, though, so I’ll just make it a mental note for now.

I made some tasty bread last Sunday which had a problem I’ve been flirting with in my bread lately: it was slightly underdone. It was, however, good, especially spread with butter, so the not-really-a-disaster was averted anyway. This was a basic cheese bread that doesn’t appear to be on the King Arthur Flour site, though several similar recipes are.

TBC cheese bread uses a fairly simple yeast dough, with the added texture of shredded cheese. The dough came together quickly, and I didn’t have to concentrate on kneading until all the moisture was absorbed, as with the last few bread recipes I’ve made. The dough was actually a touch dry. It was supposed to be “soft but not sticky,” and while it was the latter, I could call the dough “medium-stiff” at best. The recipe does say to adjust the consistency with flour or water as needed, so I worked just a little water in, drizzling maybe half a tablespoon at a time over the flattened dough, folding it over, and kneading a bit before adding more. After about two tablespoons, I got to about “medium-soft.” Good enough.

It rose right on schedule and was easy to pat into a log shape for the pan. After the second rise, it’s supposed to bake for 35-40 minutes, and you can “tent it lightly” (as opposed to… firmly?) with foil for the last 10 minutes or so if it appears to be browning too quickly. 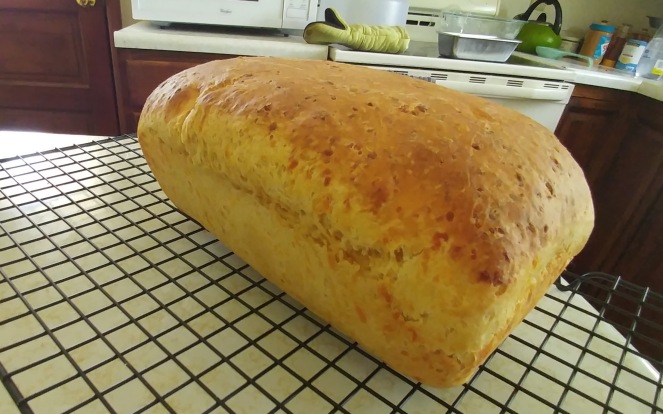 At 38ish minutes, it appeared to be gorgeously brown. I did not check the appearance prior to this, and I should have. The middle-of-the-loaf slices looked like this:

The solution, I suppose, is either to take the temperature of the bread when I think it’s done, or just try the tent and wait a few minutes. The better solution, I suppose further, is to get an oven thermometer, but I’m going to be baking in a new oven in a month, so I’m not going to bother.

I wonder what’s the first thing I’ll bake in the new kitchen?