Husband is a fan of breadsticks. He likes them with his favorite meal, pasta, and also enjoys them with pizza of any kind, especially homemade pizza pockets, a tradition for his family.

I am also a fan of breadsticks, and I will eat them with pizza, but it seems kind of silly to me to have more bread with sauce when you’re already having bread with sauce and other toppings. Why not have breadsticks with something like soup, or just make it easier and bake one loaf and turn it into garlic bread? (I would eat garlic bread with almost anything.)

First, we tried KAF’s portable pizza – kind of like a pizza pocket, a little like a calzone, essentially a normal pizza with an extra crust on top. It starts with a poolish, so I mixed the flour, water, and yeast in the morning before work.

Husband and I had been re-watching Firefly, and then we checked out Serenity to finish it off, so this was our classic pizza date night, except I didn’t account for how long the dough was supposed to rest so we basically didn’t eat the pizza until nearly the end of the movie. Anticipation makes things more tasty, right?

It was a sticky dough. I may have added a touch more flour to be able to knead it. It was nearly impossible to fold and flip it after 45 minutes of rising, but I did succeed at deflating the dough. It didn’t rise much, but the recipe didn’t give benchmarks for size, so I didn’t worry.

It was very hard to roll out because it was so soft, so I ended up smushing the bottom half of the dough into a 14-ish inch circle on our pizza pan, which made it stick slightly to the counter because of all the little holes. I did worry a bit about that–was the dough going to burn to the oven racks through the holes? (It didn’t.) I used a bit more flour to dust the second half of the dough, and I was able to roll it okay. 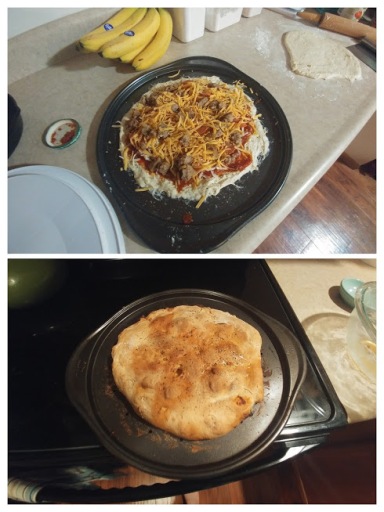 The recipe comes with two filling recipes: spinach and cheese, and ricotta and basil. I was not feeling fancy, so we stuck with cheese and sausage and pepperoni. I will have to try the filling recipes some other time.

KAF says the pizza starts out crisp and chewy, then if left to cool becomes more sandwich-like. I can attest to the former condition, but it did not last long enough to reach the second. It was very good, though the top crust kept the filling ingredients very hot–Husband actually burnt his lip on some molten cheese.

For ease, I might pick the no-knead deep dish pizza, but I think this would be good for the purpose suggested by the name–portability, in taking this to a friend’s house or a picnic.

Last week, we invited over a friend who moved to this area a few years before we did. She brought her boyfriend and brownies. I made pasta and grissini, which are a type of breadstick I’ve never had before.

I actually mixed the dough in the morning and put it in the fridge to rise. I had Husband take it out and put it on the counter an hour or so before I got home to make sure it had a little time to warm up and rise, and the timing worked out just about right. Most everything about these is simple; a normal long rise after kneading and a short rise after forming them. of course, I had to mess it up a bit, but they turned out okay. 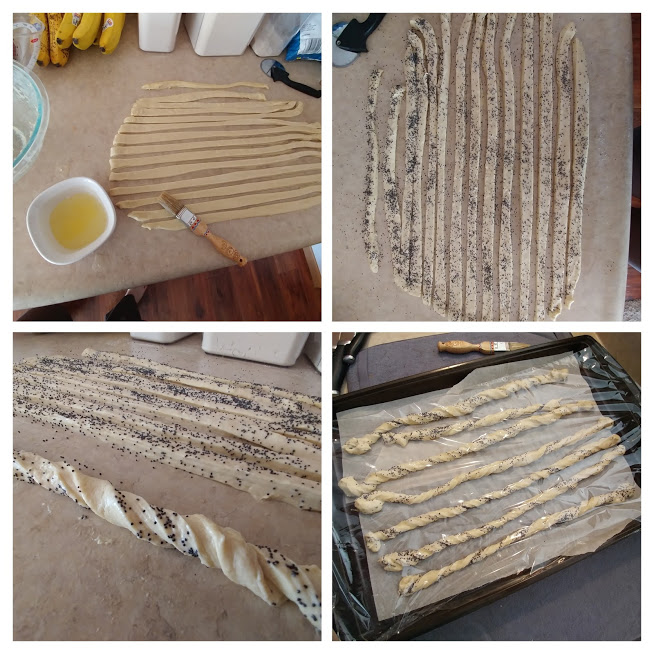 The dough was very sticky–so much humidity this summer!–but I was able to roll it out okay. I was in a hurry to finish before visitors arrived, so I cut it into strips quickly before checking the directions. Which is when I realized it would have been easier to brush on the eggwash and sprinkle the poppy seeds before slicing. Ah well. It just meant a messier counter.

The dough was sticky enough twisting them was a little tricky, but it worked out all right. They baked up quick and without trouble, and turned out quite pretty. 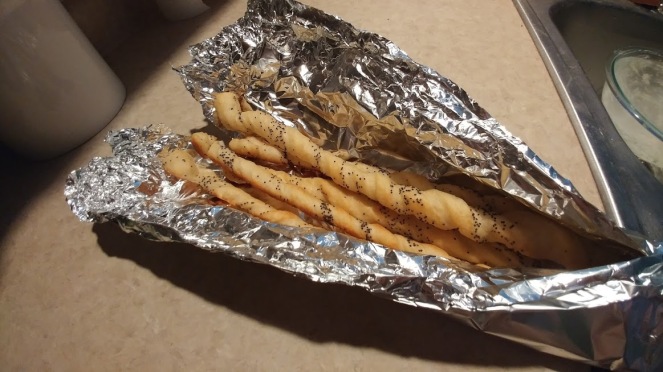 These ended up looking like they were supposed to, but I’m not sure I baked them quite long enough. They had a slightly crispy outer layer, but were fairly soft, which was not at all unpleasant, but I might see if I can get them crisper next time.

We had a nice evening playing Settlers of Catan with friends. I’ve been meeting people and re-connecting with people in the area, which is wonderful–I’ve been missing community for a long time.

I’ve been doing a fair amount of baking lately. I made KAF’s biscuits for breakfast again a few nights ago, which turned out lovely except for a burn on my arm from pulling them out of the oven, plus another iteration of the devil’s food cake and chocolate buttercream for my sister-in law May’s brithday, which turned out great. Because everyone in my family only wants chocolate for their birthdays, later today I’m going to be making the same chocolate cake for my four-year-old nephew, only with a different frosting. I’m also attempting some fairly ambitious decorating, so we’ll see how it goes!