While I don’t actually intend to cook through the recipes in The Baker’s Companion in order, I started today with the first recipe in the book: The Simple but Perfect Pancake. 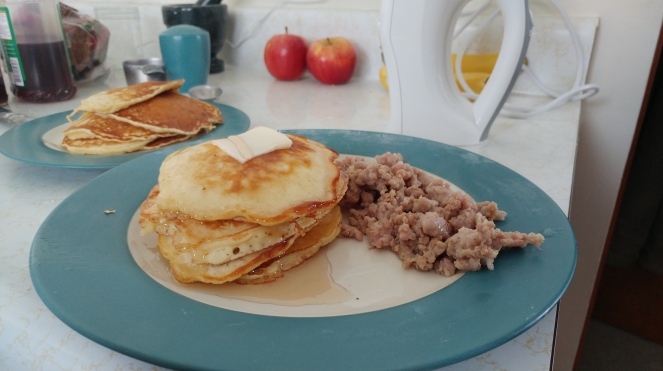 Husband and I both like breakfast for dinner, so pancakes are a pretty regular recipe for us. I usually make the recipe that’s in my 1973 edition of The Good Housekeeping Cookbook I got at a garage sale.

Comparing the two recipes, they’re pretty similar. The KAF recipe has 2 eggs instead of 1, slightly more flour and slightly less milk, some vanilla added, and melted butter listed as an option along with vegetable oil, whereas GH suggest oil. Otherwise, ingredients are the same. Based on the recipe, I would expect the KAF version to be a bit more rich. They also list using either sugar or malted milk powder as a sweetener. I don’t have any of the latter currently, but I would love to try it.

KAF also instructs the baker to beat the eggs and milk together for three minutes, until “light and foamy.” I’m in desperate need of doing dishes, so I used a slightly smaller bowl than I otherwise would have. I quit with the beating after two minutes, because the bubbly mixture was going to overflow my bowl.

Thanks to Alton Brown, I know pancakes come together by the muffin method, wherein dry ingredients are quickly added into the wet, then not overmixed so as not to develop too much gluten, which would mean tough pancakes. I did not do a very good job of that today.

Maybe it was the small bowl and the consequently small whisk I used. Maybe I should have used a spoon instead, or maybe it was the humidity in my kitchen (we had a really wet snowstorm today). But the batter was very lumpy, more so than normal with the muffin method, and it didn’t want to come together very well. I tried not to overmix, I really did.

I was curious how the fluffy eggs would impact the the texture of the final pancake. The egg-milk-foam volume had decreased a lot by the time I added in the dry ingredients, after whisking them together in a separate bowl.

The main difference between my normal pancakes and these was a more spongy texture, which I rather liked, even though the outer appearance of the pancakes was a bit more rustic. I could also smell the vanilla, more than I could taste it, which added a pleasant touch. Husband noted that these seemed a little more dense, but otherwise said, “They taste like pancakes.”

Other differences included starting the pancakes on a hotter burner than I usually do. KAF specified the pan should be hot enough for water to skitter across the surface, whereas I usually start low for fear of burning things if I don’t pay attention. Then I fuss over how long it takes to cook them. I think the KAF way is better.

I may not have mixed them that well, but this is a recipe I’ll definitely have a chance to revisit. I’ll see if I notice a change with a nicer muffin-method-mix.

2 thoughts on “First recipe: The Simple but Perfect Pancake”