When you say “brownies,” I think of my dad’s buttermilk brownies. Rich, sour, chocolatey, not too sweet. But of the two brownie recipes KAF printed in the book, neither have buttermilk. Ah, well.

These brownies were made to be given away to a family who visited our church. Husband and I each got one, plus crumbles that stuck to the pan and spatula. While we could have gladly eaten more, I think it’ll better for us if we start out by not snarfing everything I bake ourselves.

A theme in these recipes so far is beating the eggs/butter a lot. I will admit to typically just beating things until everything looks mixed, at least for something like cookies. A lot of times, I just use a spoon. If this keeps up, it’s only going to fuel my dream of someday owning a KitchenAid stand mixer… but so far, my little hand-me-down Hamilton Beach hand mixer is doing okay.

In any case, I was surprised that a recipe for fudgey brownies would specify to mix the liquid ingredients (largely eggs) together for several minutes, until light and fluffy, before adding the chocolate. I didn’t think bubbles would be an asset. Once everything was light and fluffy, I noticed an almost marshmallow-y, meringue-y texture. I think it was the bubbles combined with the sugar and corn syrup that did it.

Then I had fun folding and folding the thick chocolate part of the batter–melted butter, baker’s chocolate, and the flour–into the egg mixture. It deflated a fair amount, but was still not a super heavy batter by the time I poured it into the pan, which is different from some brownies I’ve made.

(Strangely, most of the brownie recipes on the KAF site are made with cocoa powder, not solid baking chocolate. I wonder if their opinions changed since printing the book.)

After baking, the recipe specified waiting for the brownies to cool several hours before cutting. But since it was later in the evening and I was planning on taking these brownies to the recipients that day, I rebelled and tried to get them out of the pan after about 45 minutes. When the first two brownies came out a complete (delicious) mess, I repented, then let them sit, covered, until the next day, when they were cool and I had time to drop them off. 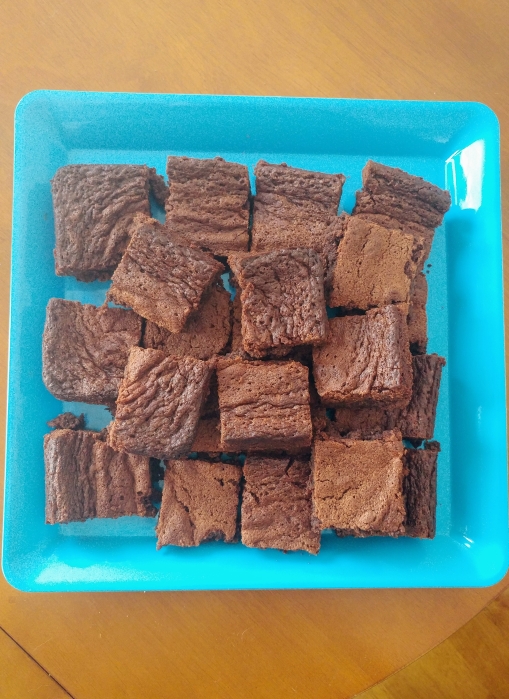 From the sample I had, I think the fluffy eggs contributed to the fairly crisp top, and established a texture, but then the oven temperature or other ingredients acted to collapse them into a rich, thick layer. They were delicious. I miss the tang of my dad’s buttermilk brownies, but these were sweet, a bit sticky, and very chocolatey.

It was a short exchange at the door, giving the cookies away, but the family had a couple kids, so I hope they really enjoyed them. I like that my church does this. I haven’t baked for visitors before (it’s a volunteer thing), but if I was visiting a church, I think I would appreciate it.